The Inverness Courier has gone online with the sonar contact we covered last year (here and here). The original article is at this link (I put this on the blog just for the record as news links can disappear forever after variable time intervals). 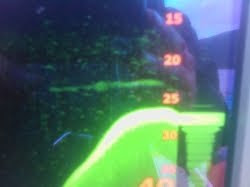 A FOURTH contender has been accepted into the competition for the Best Nessie Sighting of the Year, which has a £1000 cash prize up for grabs.

Mr Atkinson, of Fort Augustus, said the image, which shows something about 1.5 metres wide and 23 metres below his boat, was taken while in Urquhart Bay, Drumnadrochit.

The "sighting" will now be judged against three previously-reported Nessie encounters in the competition to be decided by Inverness Courier readers in an on-line vote.

It is the first time in several years bookmaker William Hill is presenting the award, following a dearth in encounters with Loch Ness’s most famous resident.

However, 2011 proved to be a bumper year with three "good" sightings reported to the Official Loch Ness Monster Fan Club, which first launched the annual competition in conjunction with William Hill in the 1990s.

Although Mr Atkinson’s sighting was not registered at the time with the fan club, it was reported to full-time Nessie hunter Steve Feltham who is based at Dores beach.

Mr Atkinson’s encounter happened on 24th August while he was on his boat, Ness Express, waiting to pick some customers up from Urquhart Castle. "The time was around 11.30am-ish," he recalled. "I know this because we only do one trip that includes a stop off at the castle and 11.30am is when I’m bobbing around waiting for them to return."

He was approaching the shallows in Urquhart Bay (depicted in the bottom right-hand side of the image) after being over deeper water (bottom left-hand side).

"I could see loads of fish — the small speckles all over the screen — but as I got closer into the shore, I was surprised to see the long solid echo starting to appear on the screen around 23 metres down," said Mr Atkinson, who quickly grabbed his mobile phone.

"I took the photo as I seemed to go over the end of it and went around again going over my track using the GPS to put me in the same place. The fish were there but the white blob had vanished.

"I have been a skipper for most of my working life and I know that this is a very unusual echo. I don’t know what it was."

Although he acknowledges the photograph of his fish finder screen contains a lot of reflection, Mr Atkinson says it definitely shows something.

The sonar image shows a slice in time of about three minutes below the boat.

Nessie hunter Steve Feltham maintains the image is "the best bit of evidence" there has been for several years and dismisses any notion it could be the rudder of a boat.


Sonar is an important part of the Monster Hunting armoury and many anomalous contacts have been made over the decades (though people will continue to debate what they actually mean). However, it has its limitations in that it is a blunt instrument. It can point towards the presence of large objects in Loch Ness but it cannot identify them as there is not enough data to make such a decision.

But then again, one could say the same about surface photography because only a portion of the creature is above the surface and the loch is so big that it more probable the creature will be further than closer to a decisive camera shot position.