They just keep coming thick and fast these Nessie stories. On the back of two intriguing photographs these past four months and a head-neck sighting, a sonar contact has entered the fray.

This story appeared in the Scottish edition of the Daily Mail for Thursday 15th September 2011. It looks like it did not make the UK website of the Mail, so it is reproduced here for those outside of Scotland.

But first the basics on sonar. I do not claim to be an expert but it is an important tool in the hunt for the Loch Ness Monster. However, like normal photographs and pictures, there are degrees of interpretation, misidentification and, yes, hoaxes.

A sonar contact is a picture made from sound waves instead of light waves. The sonar device sends pulses of sound at various frequencies depending on how deep one wants to go. The reflected echo is processed to form a snapshot of the area within the sound beam.

However, being a continuous series of pulses, the sonar picture is more like a film than photograph and each successive echo builds a trail of images as the targets in the beam move. In fact, one could argue it is more like a picture taken with a very long time exposure.

So if an object is moving it will describe a trail of some shape and thickness. This thickness is not the girth or height of the whole object but whatever returns the strongest echo. This depends not on the size of the animal (for example) but the difference in density between the water and the object. In the case of the fish, the greatest density difference is between the swimbladder and the water since it contain much less dense air (or some other gases). The rest of the fish is closer to the density of water than the swimbladder. In the case of mammals and reptiles, one main area of interest would be the lungs. 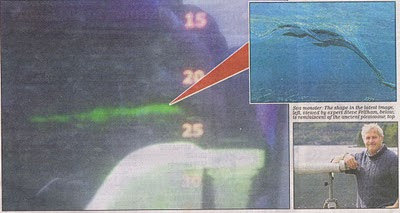 THERE is no sign of the trademark elongated neck, or the signature green humps. But the experts believe this almost unfathomable sonar image could be a breakthrough in the hint for Nessie that began in earnest in 1934.

Surrounded by fish, the ‘blip’ has a girth of about 5ft, though there is no way of estimating its length as it was moving. The image was captured by the quick thinking skipper of a pleasure boat who took a picture of the reading while waiting for his customers at Urquhart Castle, in Inverness-shire. Marcus Atkinson, 42, knows Loch Ness like the back of his hand and spends every day on its waters — but said he had never seen anything like this before.

He added: It's very weird. It was obvious it wasn‘t a shoal of fish and it just kept getting bigger and bigger. This thing is completely different from anything I've seen before.’ Mr Atkinson, of Fort Augustus, Inverness-shire, was idling in the bay when he saw the unusual sonar image. He said: ‘it's one of those moments where you just think, “What on earth is that?" I grabbed my mobile phone and took a picture before it disappeared of the screen. it's all very bizarre.‘ Mr Atkinson's picture shows a cross-section of the loch, with the boat itself at the top right of the picture.

The bright green area on the bottom right of the sonar screen is the bottom of the loch, which rises as the boat gets closer to shore. The small green ﬂashes scattered across the monitor are deepwater fish. But the part of the picture that is exciting interest is the long, thin streak - that looks a little bit like a propeller - between the 20 and 25 metre depth markers. The measurements show it is about 5ft thick - but there is no way of telling how long it is as, if the object was following the boat, it would show up on every ‘blip’ of the sonar.


Expert Nessie hunter Steve Feltham said: ‘This is a sonar contact that defies all explanation — it's a huge object. ‘it’s fascinating, because the camera hasn't an imagination — it just shows what's there.’
So ends the account and I wrap this latest sighting with some comments. The first is that the captions editor makes a howler in comparing the elongated pattern to a sleek, lithe plesiosaur. If they had read the article, they would have gone for a different picture for (as said in the intro) this is a trace built up over a succession of sonar pulses.

The other observation is that the stated 5ft girth is not necessarily the complete height of the object because if it is an animal, it will be the lungs or swimbladder being measured. But then, five feet of lung or bouyancy organs points to one big creature.

I presume the five feet measure is taken by comparing it to the 20-25 metre depth scale in the picture above. Using my trusty ruler, I get an average estimate of 2.5 feet "girth" which is still quite a measurement. I would add that if this was Nessie and we assume a true girth twice as much as my measurement (i.e. giving us five feet) and apply classic Nessie proportions based on numerous eyewitness tesimonies and analysis, then a total tail tip to head length would come out as about 30 to 35 feet - which is a typical Nessie size.

So what was it with a minimum girth of 2.5 feet that was moving at a depth of about 70 feet? No doubt some will have a rational, non-Nessie explanation for this odd signal. Was it some human artefact somehow floating at a great depth? Was it a strange effect of sonar bouncing of the underwater sides of Loch Ness? Or was it the famous and mysterious denizen of Loch Ness?

As for us, this goes into our log of claimed Nessie sightings.

ERRATA: I just remembered "girth" is the measurement around an object as opposed to its thickness. So assuming a circular type girth, a rough girth estimate given a thickness of 5ft would be Pi x 5ft which is roughly 16ft.