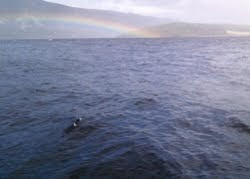 Having initially posted the media's words on the latest Nessie report, I contacted the witness himself for clarification. It is always desirable to do this as newspaper reports may omit something important or misquote. Also, when various people critique the report publicly, the witness' reaction to this can also be educational.
As it happened, some things did have to be corrected. Firstly, the time of the reported sighting was 1230 and not 0830. This may seem a minor point, but since the time of day can often be easily deduced from shadows if a photograph is taken, then doubt is cast upon the witness if the reported time and photograph time are in conflict. In this case, the reported time was wrong.

Secondly and more importantly, the two hump like objects are not all there is to this sighting. In fact, if the witness report is read without reference to the picture, it is evident that Mr. Rowe saw a large, dark object moving just under the surface of the water. The two smaller objects are a sideshow in that respect. To quote from the Daily Mail:

"There was a rainbow so I got my camera out to take a photo and noticed this really large dark shape in the loch with two humps that were barely out of the water."

The dark shape was under the water, the humps (or perhaps bumps) briefly above. In fact, when I saw the photo, I saw this shadowy area centre bottom and asked Mr. Rowe if this was relevant to the sighting. His reply was:

"Yes, the shadow beneath the "humps" details the rest of the mass moving through the water."

I invite readers to look again and note the semi-elliptical shadow at the centre of the bottom of the photograph. In fact, Mr. Rowe described the experience of being near this large object as "very unnerving". This is not a wave shadow as the sun is directly ahead in the picture and the wave just to the right has no such shadow. In fact, on the higher resolution picture that Mr. Rowe provided, it looks as if the waves from the westerly wind are shallower and washing over something rough with contours perpendicular to them.
As for birds and seals, Jon is not convinced for one simple reason, the entire object he saw moving underwater and partially above was much bigger than anything he was accustomed to seeing, in fact 2 or 3 boats in length.

We can only guess as to what kind of animal would form the shadowy shape below, but what about those two small "bumps"? In that sense, we are in the area of speculation and can only guess. However, given the distance from the main shadow, one may speculate that this may be the head region slightly surfacing. Could these "bumps" be horns of some description? We know that witnesses in the past have described horns, though such events are a small proportion of the record and they tend to be stalk like. Zooming in on the objects just deepens the mystery - they certainly are not birds in the act of a bottoms up dive as no tail feathers or legs are visible.

An intriguing photograph which adds to the mystery of the Loch Ness Monster.
Posted by Glasgow Boy at 13:15