Having looked at the very first book on Nessie in my previous posting, the latest book on the Loch Ness Monster by Tony Harmsworth was published some weeks back and I have recently obtained my own copy to read and review here. Details on the book were previously mentioned here. 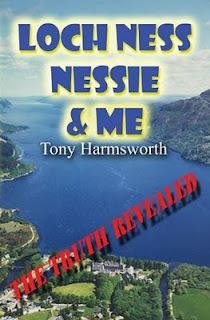 As the title suggests, the book covers a history of Loch Ness from geological times thru the times of turbulent Scottish history with a mention of the folklore that was previously attached to the loch. The majority of the book is of course devoted to the time Tony spent there as the brains behind the Loch Ness Exhibition Centre and subsequent ventures as a Loch Ness Bus tour guide and at Fort Augustus Abbey and as a plain old resident overlooking Loch Ness for nigh on thirty years.

As you can imagine, he has a lot to say and for those interested in Loch Ness and its creature, it is a fascinating read as he recalls his times with well known Loch Ness figures such as Rines, Dinsdale, Shine and a host of others. To even the most knowledgeable Nessie-phile there is plenty to read that is new as well as facts that were forgotten and one needs reminding of.

There is also the human side and Tony recounts his highs and lows at the Loch Ness Exhibition Centre, his having to start again after leaving the Centre and later being laid low by a stroke. If any good thing can come out of this malady it was that he managed to finally finish the book he had been planning for years and which we now have the chance to enjoy.

As for Nessie, of course, many a page is devoted to the dark denizen of the Loch and Tony examines the various photos, films and eyewitness reports from a critical point of view. Such a task necessitates a biopic of his own journey of belief in Nessie from standard plesiosaur to something less exciting but nevertheless more probable in his view (he also recounts a sighting of his own which he feels is not so easily explained away by modern explanations).

From a personal point of view, I can sympathise with Tony's triumphs and tragedies and also with the thrill of those early days when there was a huge saurian beast awaiting final discovery in Loch Ness. We both started out plesiosaur believers but have both drifted in different directions. Tony now takes a view that is more skeptical while my own is still in that area where logicians disdain to tread.

Nevertheless, a welcome addition to my Loch Ness Library considering the low grade stuff that tends to permeate the real and virtual book shops and one I would heartily recommend to others.
Posted by Glasgow Boy at 07:05