It was back in 1999 that Kurt Burchfiel published an article entitled "Rogue Nessie" for the Strange Magazine espousing the view that the Loch Ness Monster was not a species indigenous to the loch, but a visitor that made its way there as a juvenile growing to the proportions we read about today. Like all theories, it has its pros and cons, but since that article over 17 years ago, little has been said further on the subject.

The theory itself was not new back in 1999. Rupert T. Gould, in his 1934 book, "The Loch Ness Monster and Others", speculated that the creature was an errant sea serpent and this was echoed by his contemporary, Antoon C. Oudemans, in his pamphlet, "The Loch Ness Animal". Indeed, such a theory was regularly discussed in the newspapers of 1933 and 1934 and whenever sightings seemed to dip, the speculation was whether the creature had returned back to the sea.

After that, the popular view of the monster as part of a permanent, breeding population took hold and has generally held sway to this day. But, for me, the itinerant theory has always had some merit for reasons I will explain further down.

The rogue or itinerant Nessie theory claims to address some faults in the indigenous Nessie theory. The first is that there is not enough food or genetic diversity to support an indigenous population. I don't agree with this view and have laid out my views on this before. However, even if the loch does provide enough sustenance for such a population, that does not automatically exclude the idea of a rogue monster.

The second argument proposed in favour of this theory is that there is a lack of evidence for multiple animals in the loch, thus strengthening the case for a single animal that lost its way. I covered the issue of multiple animal sightings in an article written back in 2014. It was discovered that less than 2% of the sightings database involved what could be two or more creatures. The conclusion of that study was that the Loch Ness Monster was more a tiger than a lion in having no herd instinct.

Nevertheless, that two percent does speak somewhat against a rogue Nessie viewpoint, though at a mere two percent, the door is still left open for a rouge Nessie viewpoint (as explained further on). Unfortunately, because of this, Burchfiel sacrifices the supposed multiple monster Lachlan Stuart photograph of 1951 on the Rogue Nessie altar, citing the Richard Frere untruth.

Finally, and perhaps more importantly, are the eyewitness testimonies of creatures being seen in the waterways between Loch Ness and the open sea. After all, if the creature is to travel from sea to loch, there is a chance it may be spotted. Kurt cites four cases to this end, but only two of these can really be used. These are Columba's 565AD story, Kathleen MacDonald's 1932 account and the McGill story from 1965 recounted in Holiday's Great Orm book. He also recounts the almost apocryphal tale from 1900 concerning the strange animal found dead in the Corpach Lock near Fort William.

I would personally discount the Columba and Corpach accounts as the first, though I accept it as indicative of a monster in Loch Ness, does not qualify as an eyewitness account. The second incident did not happen at Loch Ness, but rather 25 miles south of Fort Augustus. That leaves two accounts which may or may not be deemed a sufficient amount.

However, since reading that account, a look at the sightings database reveals a number of other reports of strange creatures seen between Loch Ness and the Moray Firth bringing us up to a grand total of eight. I tabulate these below as well as a rough map of where these sightings occurred (denoted as the black numbers). 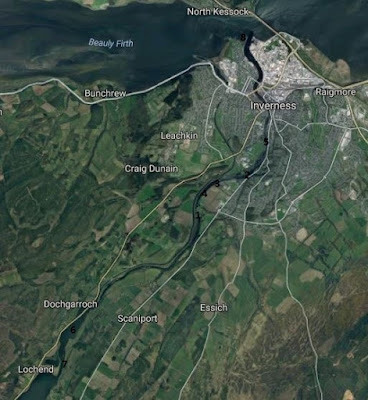 Click on the table to enlarge. The eighth case occurred right at the confluence of the River Ness and the Inverness Firth, one may class that as either Loch Ness Monster or Sea Serpent, I include it in both categories.

The obvious question as to all these reports is, what do they mean? The usual sceptical reply will be that they are an assorted collection of misidentifications and lies. Certainly, in the case of the 1932 MacDonald case, one wonders what exactly that was. However, if the sightings are as indicative of a large, unidentified creature as the ones reported from Loch Ness are, then they appear to signify a behaviour which compels the creature to leave the loch as well as reside in it.

One further question is what direction was the creature seen to move in for each case? Towards the loch or towards the sea? Reading over the accounts, we have 4 accounts stating the creature was heading seawards, 2 stating lochwards and 2 giving no indication either way. Note most of the reports hail from the busy 1930s period but then dry up after the mid 1960s.

Does this suggest the creature(s) was regularly leaving and entering the loch in the 1930s before ceasing this pattern before a brief uptick thirty years later? And why has no one reported a single instance of the creature in the river waterways in these intervening fifty years? Surely even supposed misidentifications would still generate reports? This remains a conundrum.

However, there are other waterways aside from the River Ness where one may presume the creatures go. And so there is the small matter of strange creatures reported in lochs connected to Loch Ness along the Great Glen waterway, such as Loch Oich, Loch Lochy and Loch Linnhe. In fact, when I wrote an article on Loch Oich in 2012, citing reports from the 1870s, 1936 and 1998, I suspected these were indeed itinerant Nessies.

So, are these creatures totally unrelated to the Loch Ness Monster or are they one and the same? To get from Loch Ness to Loch Oich, you have the five mile swim along the River Oich. You can forget about getting there via the Caledonian Canal, be it the north or south of Loch Ness.

At the southern tip of Loch Oich, any aquatic creature would then have a short trip down the Caledonian Canal before encountering the Laggan Locks at the entrance to Loch Lochy. This may pose too much of a problem to get past as it is a two flight lock system, so one wonders if any cryptids reported in Loch Lochy have actually made their way there from the south?

As we progress in that southerly direction and pass through Loch Lochy, the end of that loch is met with the continuation of the canal and the appearance of the River Lochy. These two eventually empty into the Loch Eil-Linnhe water complex which then opens into the sea. If a creature took the canal route, they would again hit the problem of the multi lock system of Neptune's Staircase in the Corpach area. Any sensible creature will take the river route, but apparently the creature caught in the Corpach lock in 1900 did not.

So, if the Loch Lochy and Loch Ness monsters are related, it would be more via a common ocean route than via the intermediate Loch Oich. I would surmise that the creatures that are seen in Loch Linnhe have more to do with Loch Lochy than the ones in Loch Oich and Ness. Which brings us to the final thoughts on the sea serpents that are reported around the Scottish coastline.

THE LOCH NESS SEA SERPENT
Once our itinerant Nessie reaches the sea, it becomes a sea serpent. Can the distribution of sea serpent sightings around the Scottish coastline tell us anything about the Itinerant Nessie theory? Thanks to sea serpent researcher, Charles Paxton, I obtained his list of about 70 Scottish eyewitness reports to which I added a further sixteen reports I had found during my own research. Not all reports were specific enough to pinpoint on a map, but the results are shown on the map below. 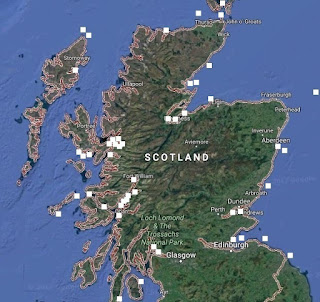 As you can see, the distribution of reports is not uniform across the coastline. There is a degree of grouping going on in areas such as the southern entrance to the Great Glen water way, around the Loch Duich and Skye area and in the western part of the Moray Firth area.

The problem, as with mapping Loch Ness Monster sightings, is that there is a human element to this configuration. In other words, sea serpent sightings are more likely in areas where humans tend to congregate more. For Loch Ness, that would be places near the castle and population centres such as Fort Augustus.

In the case of sea serpents, similar tourist hot spots will statistically produce more sightings, assuming all other things remain equal. So it is perhaps not too surprising that such areas do have clusters, but on the other hand, one should not assume it is the only reason. For example, I see little correlation between ferry routes and sea serpent reports (although one must remember these sightings go back to the 19th century and routes may have changed).

However, if aquatic cryptids are making their way in and out of the Great Glen lochs from the sea, the clustering we see at each end of the fault line looks consistent with that. Why the Skye area should cluster from a sea serpent point of view leads to one interesting theory, but that is for another day.


That does leave the door open to some speculations. For example, could Loch Ness host more than one species of cryptid from the vast Atlantic Ocean from time to time which then retreat back? How alien as opposed to indigenous would any given sighting of the Loch Ness Monster be? How true were the 1930s speculations about Nessie being a visitor trying to get back to the sea? How many creatures stay to breed and see out their days in Loch Ness?

The answer to me lies between fully indigenous and fully itinerant. Whether Loch Ness may at sundry times be devoid of creatures is not something I adhere to myself, but the population could see some interesting swings over the centuries. So what is the current situation with regard to this theory? Is the population at a low cycle as some have discussed and is this due to some having left years past or others not being replaced?

And, finally, perhaps by way of appeal, you may have noticed the paucity of reports from the River Ness and around the Scottish coastline from the 1970s onwards. Strangely, out of over seventy sea serpent reports, only two come from the 1970s and one solitary case in the last forty years! Have all the sea serpents vacated the seas around Scotland? I think not, but the problem has some facets to it.

First, the enthusiasm of cryptid believers produced various books on these creatures prior to the 1980s and that helped catalogue old reports from varied sources. There may well be primary sources for Scottish sea serpent reports from the 1980s onwards, but I am not sure the research to collate them has been done, and I don't expect the current crop of sceptical researchers to be as motivated in finding them.

Secondly, it may well be that the media is not publishing as many of these reports as they used to. Finally, there will be reports in various books scattered abroad, these will be difficult to find, but not impossible.

Whether the drying up of reports from the River Ness since the 1960s suffers the same problem is not clear since this is a more watched and compact region. Perhaps it does reflect a decrease in cryptid activity. Be that as it may, if anyone knows of sea serpents and River Ness reports from the 1970s onwards, i would appreciate an email or comment below.