In a loch the size of Loch Ness, you will expect a wide of variety of objects to be lying at the bottom of its dark, murky depths. We have mentioned a panoply of such things over the lifetime of this blog and they include John Cobb's speedboat, various ships, a Viking longship, a Wellington Bomber, a monster prop, the body of Winifred Hambro, fridges, cars, myriad pieces of Nessie hunting equipment, steam tractors from the time of the 1930s road expansion and, of course, a number of Nessie carcasses. Perhaps you can add your own object to this Loch Ness junkyard.

Now I find another object named in the Aberdeen Press and Journal, dated 13th December 1950. This goes back to July 1544 and I reproduce the article below. 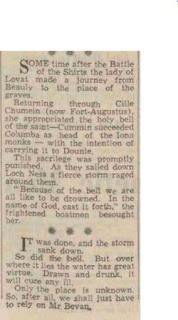 In hindsight, the story was already in my copy of George Campbell's "The First and Lost Iona". The bell was taken from the ruined priory at Cille-Chumein (the town's name before it was renamed Fort Augustus after the Battle of Culloden). The intention was to rehouse it in the Lovat's church in Glen Covinth near Beauly. Campbell's books relates how the bell was "sacrificed" as an offering to the spirit of the lake, which I would take to be the Loch Ness Each Uisge.

Now, the location of the holy bell is unknown and yet we are told the loch waters above it have healing powers. You just need to know where! The reference to Aneurin Bevan brings us down to earth as he was the then architect of the National Health Service (another religion of the British people).

However, Campbell speculates from the Wardlaw Manuscript in suggesting the bell may have been deposited at or near Ellanwirrich or Cherry Island as it is now called. But, using my previously calculated silt deposition rate of 4mm per annum suggests the bell is now under a metre of silt. One would presume that, if it exists at all, it is not going to be found anytime soon.