Yet Another Mysterious Picture 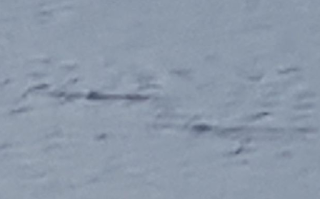 No sooner has the discussion about the strange dorsal fin at Loch Ness photo began to subside than another one appears in the Daily Mirror today. This photo appears to show two large objects, each  estimated at 10 metres long, making their way along the loch and was taken the day before our aforementioned fin photo and was in the same area of the loch, opposite Inverfarigaig, where Kate Powell photographed that mysterious dorsal fin. 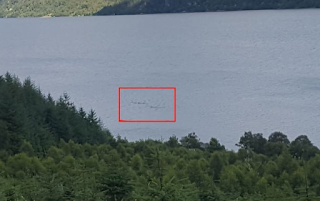 My first reaction was to check for anything indicative of a dorsal fin, but since the picture was taken at a distance of 400 metres, it is too far to make out such detail. Something barely breaks the surface on the two objects, but who knows what they are indicative of.

The article mentions the possibility of two flippers visible in the picture propelling the object, and one can see two water disturbances either side of the object to the right. However, I cannot ascertain if that is the words of the witness, Ian Campbell, or the editor's words.

Whether this has anything to do with the recent dorsal fin picture is hard to say. But two dolphins? This loch is beginning to get a bit too crowded, so I'll suspend judgement on this picture, let the usual waves, logs and birds explanations have their say and move on.


It's the creature that's terrorised the water's of one of the UK's deepest lakes for decades - but now it turns out Loch Ness could actually be hiding TWO monsters.

A new photograph snapped at the Scottish loch has revealed what looks like a duo of swimming animals in its depths side by side. Ian Campbell was on a bicycle ride with his son and a family friend when he spotted two big 'creatures' apparently swimming across the Loch together. The 56-year-old, who says he is not a man 'given to flights of fancy' is convinced that what he saw and pictured from around 400 metres away were both around ten metres in length.

In one of the pictures it appears that whatever was in the water was propelling itself along using its two flippers, one at each side of its body. If what Mr Campbell pictured was a type of hitherto undiscovered creature, then it could mean that the Loch Ness monster has been breeding - or, on the day he saw it, swimming around with an offspring or mate.

Mr Campbell was around five miles south of the village of Drumnadrochit on the western shores of Loch Ness while on a 40-mile bicycle ride between Fort Augustus and Inverness on hill tracks on August 21 with his son Fraser, 13, and family friend Mrs Karen MacPhee, 54, when the two shapes appeared in the water.

Mr Campbell's son also saw the 'creatures' but Mrs MacPhee was cycling some way behind and did not get a good look. Mr Campbell says they watched for around 30 seconds before losing sight of the objects but he managed to take a photograph using the camera on his phone.

He says: "At the time we saw it we had stopped for a rest and to admire the view. It seemed to appear suddenly from nowhere. "I said to my son: 'What is that in the water?' He said to me that it looked like a big animal. "I said 'I think you're right' and grabbed my camera phone to take a picture.

"We watched for around 30 seconds before it disappeared from view and by that time Karen had caught up and she saw it for around five seconds. "We talked about it afterwards obviously and we just had no idea what it could be. I would estimate they were ten metres in length and I took the picture from around 400 metres away.

"I was saying to my son that we had just seen the Loch Ness monster and he was saying 'Yes, right'." Mr Campbell, of Taynuilt, Argyll, who works as an environmental health regulatory officer for Argyll and Bute Council, said he knew the area well. It was a calm day and he had never seen anything like that before.

"I am convinced that what I saw was two creatures,' he said.