A Piece of Loch Ness History 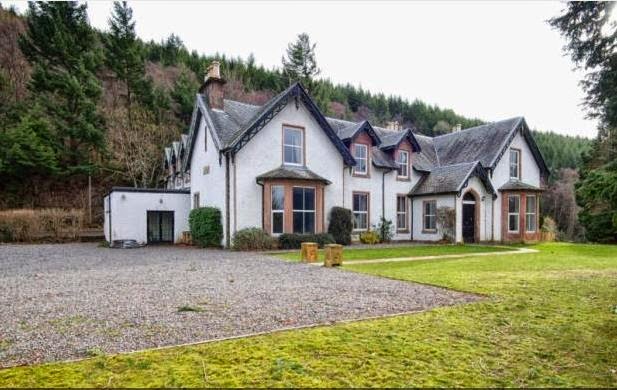 I note a piece of Loch Ness history is on sale for the mere price of around £450,000. It is the Foyers Lodge just outside of the village of Foyers on the south side of the loch. Holding twelve bedrooms, it has been a hunting lodge, a hotel and a house to let.

But, as I recall, and others may correct me, this was where Tim Dinsdale lodged during the week he captured his famous film footage and I do believe Peter O' Connor was there when he took his controversial photograph down the hill. It was the then proprietor of the lodge, Hugh Rowland, who motored his boat out onto the loch for Tim to film his comparison footage and Hugh claimed his own triangular hump sighting back then.

One previous owner, Buddy MacDougall, also claimed her own sighting of the creature when she said:

We were constantly being asked about the Loch Ness monster and one afternoon, along with two guests, we did see an upturned cabin cruiser sized object out in the bay which sank and then reappeared then sank for good.

Apparently, it even has a ghost and Buddy MacDougall again relates:

The hotel had a very friendly ambiance but quite often we did see a little white dog disappearing under the kitchen table. Also, after pooh poohing Lorna and Mhairi for reports of eerie goings on in their bedroom, I also had a frightening experience when I rushed upstairs one dark night to get something from their room when they were away from home. On opening the door, I was utterly shocked to feel a presence right in front of me. There was nothing there when I switched on the light.


Quite how many have thought they have seen the Monster from the lodge's high vantage point is difficult to tell, but for less than half a million, you can get your own piece of Loch Ness real estate.