Having published my first thoughts on steamships and Nessie, it was no surprise that the critique came under attack. In the main, I was told I was underestimating the numbers and was told how steamship commerce actually went from strength to strength. As we say in Glasgow, Mibbes aye, Mibbes naw.

Unfortunately, the need for quantitative analysis was beginning to shrink back into the qualitative as the anecdotal began to muddy the waters. Thankfully, help was at hand to bring us back into the realm of integers. 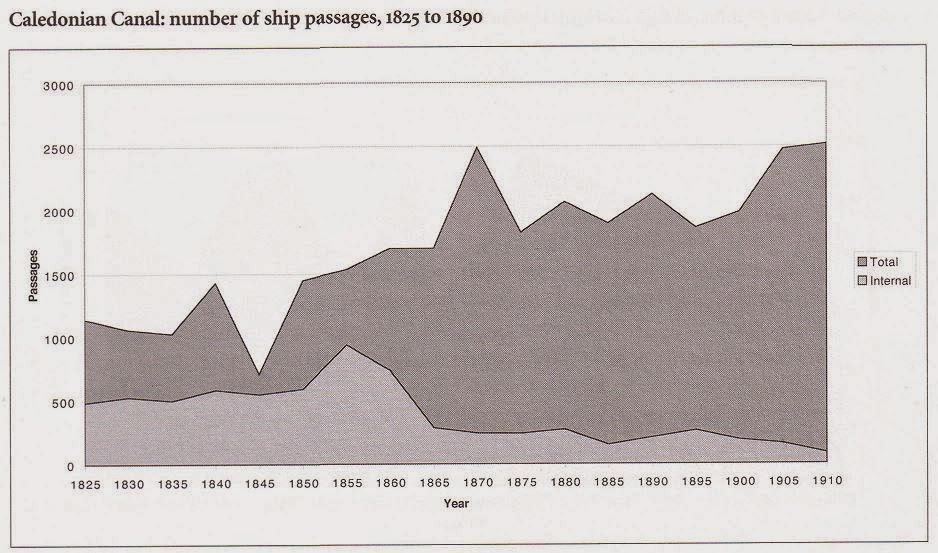 My original number for yearly passengers was 15,500 based on Len Paterson's "From Sea to Sea", a history of Scottish canals. I took this as the average over forty years and proceeded thusly. However, the graph above from the same book adds more information. It states the number of ship passages per annum through the Caledonian canal between 1825 and 1910.

Of course, this won't exactly follow in real life. The canal hosted "tracking" boats and "passage" boats. The first was goods oriented and the second was passenger oriented. The passengers numbers may be overestimated if a greater proportion of the ships transport commodities rather than people. Conversely, numbers may be underestimated if more pleasure cruises than expected ply their way up and down the canal.

Now we see a rise in ship numbers and one may assume that the objection to my initial analysis was correct. But wait, the numbers peak in 1870 and then drops into a horizontal range that is not much more than my original working number. We weren't told about that in the objections. I would suggest this drop was down to the great depression of the 1870s.

In fact, that major economic event was enough on its own to guarantee that the argument for high numbers of tourists was not going to happen. When the economy goes south, what goes first? You got it, discretionary spending such as holidays. Or at best, you pick a cheaper way of doing it. Since going up the Caledonian canal took three boats and three days, it was a no-brainer to find a quicker route by rail which did not consume so many precious days and income.

It is also interesting to note the sub graph for internal passages through the canal. They started a slide before 1860 from which they never recovered. The author speculates that this was due to people moving over to alternative forms of transport such as the railways. This also would divert more potential witnesses away from the loch.

Nevertheless, it is new numbers and so using the 15,500 passengers of 1863 as a baseline, the other numbers were estimated by proportion. In this way, a new total number of passengers for the last 40 years of the 19th century was estimated at 741,000. This compares to my original 40 year estimate of 620,000 or a 20% increase.

Using my estimate of one monster sighting for every 30,769 modern tourists gives us an estimated 24 sightings over 40 years. My original estimate was 20 sightings and so we go from 0.5 sightings per year to 0.6 per year. Clearly, this makes little difference to my original conclusions and again I suggest this argument against the Loch Ness Monster is less than convincing.