Remember this image below from Google Maps a few years back? It made the newspapers but it was clear on examination that it was nothing more than a boat with attendant bow waves.

It was seen making its way up the loch north of Invermoriston as the wider map shows below. The scale of 200m gives an idea how big it is. 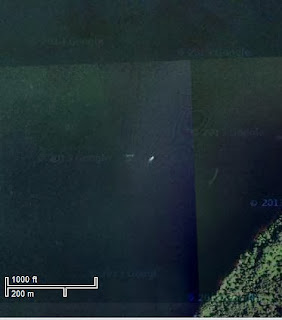 Then there was the filament like images spotted on Loch Ness images and covered here. However, another stranger object has turned up, not in Google Maps, but Apple Maps recently. This image is shown below and something can be seen to the left making its way presumably south down the loch. The zoom in is shown below. 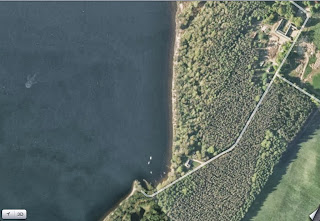 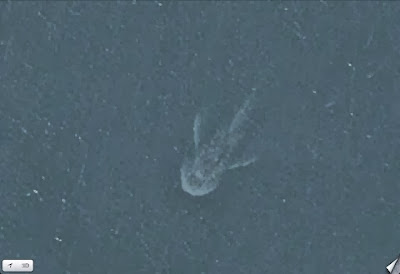 Now as it turns out, this object does not appear on Google maps and I show the equivalent picture below with attendant scale. Using the scale gives a rough size of 40 metres for the entire object, which is about twice the size as our more famous Google Boat image above. 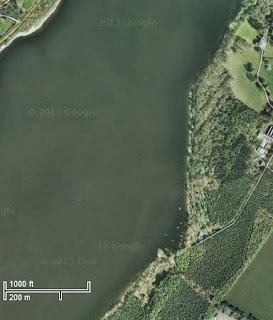 Like the Google Boat image, I doubt the object is all one object. There is wake action going on in both pictures to the extent that the Google Boat is half wake and half boat (10m each) or the standard size of a Caley Cruiser boat.

The other object is a bit more difficult to parse, but the object is perhaps 20 metres long which makes me wonder if it is the bigger Jacobite cruiser boats that head south from the locks near Inverness? If somebody could find one of those larger boats on satellite imagery, that would be helpful. An overlay of the two objects show some similarities and dissimilarities. 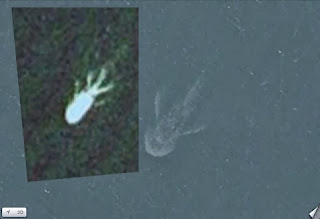 The first question is why is the image so much fainter? If you look at the original Apple Maps image, you can see the smaller boats moored near Aldourie Castle (below centre of image). Like our Google Boat, they are quite quite white in colour. So why is this object not showing a similar albedo? Could this be because it is just below the water's surface or perhaps it is a darker colour?

However, to produce the presumed bow wave we see, it must be showing something at the surface. And what is that crescent type "wave" ahead of the main part of the object?

Anyway, comments are invited in an attempt to identify what is going on here.