The Man Who Filmed Nessie (Review) 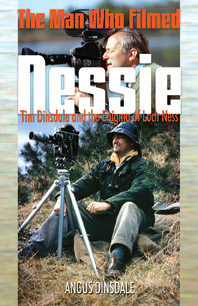 Twenty six years after his untimely death, a biography on the greatest hunter of the Loch Ness Monster has finally arrived. The author is that hunter's own youngest son, Angus Dinsdale, who was born the night the BBC televised Tim Dinsdale's famous footage on their Panorama programme.

Perhaps that juxtaposition of Loch Ness Monster and family life sums up the man who devoted twenty seven years to the hunt for that most elusive of quarries. It was some weeks earlier that he had shot a minute of film showing a dark object crossing Loch Ness. The author of the book is in no doubt as to what he filmed. He was the man who filmed Nessie.

Angus' book fill in the gaps left by his own father's works. Tim had written of his times at Loch Ness in his books "Loch Ness Monster" and "Project Water Horse".  However, not much is known of the child, youth and man prior to 1960 or the man in his twilight years. This book reveals more of the man who began life in Aberystwyth, Wales in 1924.

Tim's life continued in the Far East where his father worked and in those Depression years, we learn something of his formative years which took in the normality of school life but also the tale of pirates hijacking the ship which was taking him back to school for a new term.

Needless to say, he survived to tell the tale and the story continues into the war years as Tim joined the Royal Air Force and afterwards as he pursued a career in avionics. Add to this his marriage to Wendy and the arrival of children and you have the formula for a normal, happy life.

Then the Loch Ness Monster came along.

We read how Tim's interest in Fortean phenomena began with a haunted house in Quebec. When he moved back to England, a curious magazine article entitled "The Day I saw the Loch Ness Monster" piqued his curiosity further. Before long, he was off on a week long trip to investigate it for himself and the rest is history. 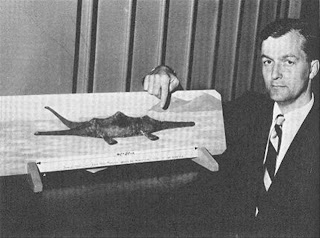 Did I say happy, normal life? We read that within some years Tim gave up his aeronautical career to pursue Nessie and constantly skirt on the edge of financial insecurity held back by book sales, TV appearances and the lecture circuit.

Once the book enters monster territory, the author draws on Tim's own words from his two main books, but especially from "Project Water Horse" which tracks Tim's activities up to the early 1970s. The man's determination is evident and is bolstered further by two head and neck sightings. But the conclusive proof he sought never comes and the 1970s fade into the 1980s.

I was especially interested to see what Tim got up to in the 1980s but that which comes upon all men as the eye grows dim and the natural force abates came upon Tim Dinsdale. It was evident that health issues and a damaged boat put an end to the long days of drifting by boat along the loch shores and pulling his weight with the LNI and Rines team.

I had recently read "Project Water Horse" and so the stories of various personalities, experiments and events around the loch were familiar. So, in some sense I am the wrong person to speak on the book as the impact is somewhat lessened by this familiarity. I am sure others will not be so "disadvantaged" as they read it.

Angus also tells the story from a child's point of view since he was a school boy throughout these times. We have tales of family ventures, injuries, frivolity and the time his Dad ruined the washing machine in the name of Nessie research. Angus relates his own volunteer work for the LNI (despite being only ten years old) while one reads with amusement of the "leisure activities" such as the races to empty the latrines in the quickest time.

The human element is very much present in this book but do not expect a long and detailed defence of the Loch Ness Monster. Certain photos, films and sightings will be cited but the ongoing debate about various items is left for others.

The Man Who Filmed Nessie completes the story of the man who summed up the search for the Loch Ness Monster. I am not sure we will see his like again as scepticism rolls over the loch like a Highland mist. Individuals still visit the loch in search of the prized picture of Nessie, but not at the sacrifice and cost we saw exercised by Tim Dinsdale. It may take another better Dinsdale type film to start the circus again. However, I suspect most are convinced that will not happen.

The book is also prefaced with an introduction by Tim's widow, Wendy. Further details can be obtained at this link.