Take a look at some ancient maps of Scotland and you may notice a strange phrase inscribed beside Loch Lomond which goes something like this:

“Loch Lomond famous for its floating island its fish without fins and being frequently tempestuous in a calm.”

Thus did cartographer Hermann Moll annotate his 1712 map of the Scottish county of Dunbartonshire (below). Cryptozoologists have speculated on whether these phrases refer to a strange creature residing in Loch Lomond or have a more mundane explanation. 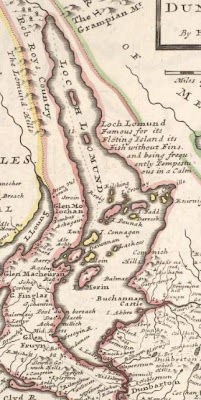 The source for this story was Richard Franck, a Cromwellian soldier who at some point visited or was stationed near Loch Ness during the 17th century. As a result of his military and angling pursuits in Scotland, he published in 1696 a travelogue of his experiences called "Northern Memoirs" which in the tradition of the time carried a long winded sub-title. The front page shown below is from that first edition. 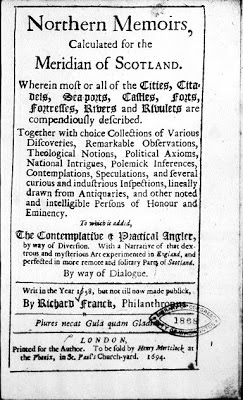 Though the initial book was written in 1658 with additions into 1685, it took 38 years to be published. I suspect this was due to the restoration of the monarchy in 1660 which would have led to a suppression of any literature which smacked of the Cromwellian until the more favourable ascent to the throne of William of Orange in 1689.

The book itself is written in a conversational style between three fellows called  Arnoldus (Franck himself), Theophilus and Agrippa. But what do we know about Captain Richard Franck? According to Brown's "Early Travellers in Scotland" (1891):

Of Richard Franck we know little more than he has himself casually told us in the book from which the following extracts have been made. It has been conjectured that he was born in 1642, and that he died in the year 1708. From himself we learn that he was a native of Cambridge, that he received "a slender education" at its university, and that the impending civil wars drove him for a time to make his residence in London.

We have it also from himself that he at one time resided in Nottingham, though in what capacity, or whether before or after his visit to Scotland, he does not specify. His first acquaintance with Scotland was made as a trooper in the army of Cromwell in 1650. It was probably in 1656 or 1657, however, that he made the northern tour of which his Memoirs is the record.

FRANCK'S FLOATING ISLAND
But let us now look at what Richard Franck said of the floating island of Loch Ness. First he speaks of Loch Lomond:

The large and spacious Loemon, so generally discours'd for the floating island; but it floats not here in these solitary Western Fields, as fictitiously supposed by the ignorant reporters. But our travel will reform that error in time, when we  come to trace the mountains beyond Badanoch.

As far as Franck is concerned, the action is to be found at Loch Ness

The famous Lough-Ness, so much discours'd for the supposed floating island; for here it is, if any where in Scotland. Nor is it any other than a natural plantation of segs and bullrushes, matted and knit so close together by natural industry, and navigated by winds that blow every way, floats from one part of the Lough to another, upon the surface of the solid deeps of this small Mediterrane.

The relevant page from the first edition is shown below. 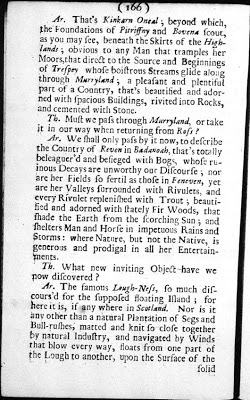 To which he adds a final poetic flourish:

Where the Tritons and Sea-nymphs sport themselves on the slippery waves, sounding an invasion to her moveable inmate; supposed by some, the floating island.

You will perhaps have noted that Franck is the first recorded Nessie sceptic in the history of mankind as he immediately bats down any notion of monsters with his own explanation that the whole thing is just a mass of dead plants floating around the loch. The aim of this post is to debunk this Cromwellian debunker.

The first thing to note is how the floating island of Loch Lomond is "generally discours'd" about meaning there is a degree of general talk concerning the subject and this is certainly borne out by the previously mentioned map references.

However, Franck says that the floating island of Loch Ness is "so much discours'd" about which suggests that at the time of writing in 1658, this phenomenon was the talk of the town, so to speak. Who it was "much discoursed" amongst is a matter of debate. Was it amongst the angling circles that Franck shared a common interest or a wider audience who were keen to follow the journal of a tourist?

Whatever the audience, it seems evident that Franck expected them to have some familiarity of this story and even notes the phenomenon is "supposed by some, the floating island" in contra-distinction to his more mundane view.

It seems a search of 17th century literature may yet produce further information about that then popular subject. News papers or letters were sporadically published back then (Cromwell banned them for years) and so good luck if you fancy embarking on such research. 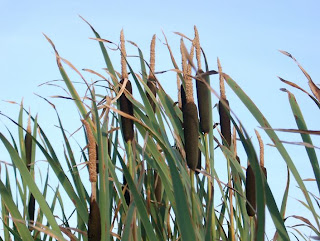 But going back to Franck's sceptical stance on this phenomenon. The first thing we deduce is that he is formulating an explanation based on guesswork. How do we know this? The fact that he suggests our Floating Island is an entanglement "of segs and bullrushes" proves it. No serious or even diehard sceptic of the Loch Ness Monster would suggest such an explanation today. This can be demonstrated from the list of explanations that the Loch Ness Project suggests for monster sightings.

Twenty different objects and effects are given but not one could be interpreted as the explanation offered by Franck. Debris such as logs are mentioned but these are a far cry from the vegetable mats that were once promoted by the leading sceptic of the 1960s, Maurice Burton.

In 1960, he published "The Elusive Monster" which placed a lot of weight on this explanation. The problem was that no one was seeing these elusive vegetable mats and this theory soon lost favour when the various expeditions to the loch took a closer look at the loch and its environs.

Furthermore, Franck suggests bullrushes as the main component of his floating island. As it turns out, not only are vegetable mats exceedingly rare on Loch Ness, but ones made of segs and bullrushes can be dismissed out of hand. I consulted a local commercial gardener at Loch Ness who told me bullrushes do not occur naturally at Loch Ness and any clumps found around the loch have probably "escaped" from nearby gardens.

It is further deduced that Franck had not even seen this floating island else I am quite sure he would have regaled us with further tales of what he personally saw. So, anyone thinking that Franck had rowed up to this phenomenon and examined it will be sadly mistaken. I would note that other travellers to the Highlands do not mention these vegetable floating islands at Loch Ness so I deduce they were unknown as a natural phenomenon - as they practically are today.

Richard Franck further assures us that the Floating Island is

"navigated by winds that blow every way floats from one part of the Lough to another ..."

However, this appears to be guesswork again as the main prevailing wind at Loch Ness is from the South West. This is due to the warm Atlantic air being channelled up the Great Glen which acts like a wind tunnel and can increase the general wind speed. Notice also how Franck implies that our Floating Island seems to have a habit of appearing all over the loch. In reality, any debris mats will tend to be blown up the loch to be caught on the shore again or simply sink.

Two further speculations on this point may be in order.

Firstly, it is likely Franck's main source of information were the Cromwellian soldiers stationed near Loch Ness. It is known they had a garrison at Inverness and also had a large ship on the loch. Apparently this ship was moved to the loch via the strenuous task of rolling it along on logs across land. It seems the Caledonian Canal was over a hundred years too late!

Further research suggests that it was unlikely the locals were the source of information since their superstitious dread of the Loch Ness Kelpie dissuaded them from talking about it since they regarded its appearance as a bad omen. So their silence was a given, especially to invading "sassenachs". Cromwell's soldiers would have held no such inhibitions and would have readily talked about their experiences to a fellow Cromwellian such as Franck.

In fact, I may be so bold as to state that without these "Roundheads" we may have never heard of Richard Franck's Floating Island. I say that because of the stony silence foreign travellers tended to be greeted with by fearful natives in these supernatural matters.

Secondly, I would suggest the term "Floating Island" was a phrase applied by Franck rather than the garrisoned soldiers. Did the witnesses to this strange phenomenon on Loch Ness call it a floating island themselves or was Franck keen to link it with Loch Lomond for conversational effect?

I have no particular objection to that literary approach except that readers may automatically infer that the two floating island phenomena are related not only in name but also in solution. I don't think Franck's use of the terms necessarily implies that.

So what could the Floating Island of Loch Ness have been?

Another suggestion is that it could have been Eilean Muireach or "Cherry Island" which is an artificial island built on a crannog but now deserted and overgrown. The problem, of course, is that this island does not float and is very much rooted to the spot. As an aside, I read that Cherry Island was once much bigger due to the lower loch levels before the Caledonian Canal was built and indeed there was a smaller, now submerged island called Eilean Nan Con or the "Dog Island" but the same argument applies. 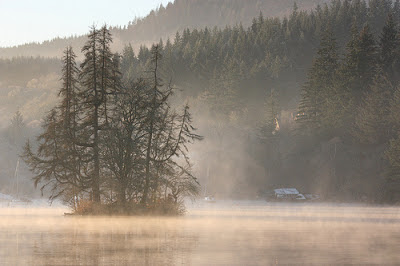 May I suggest another explanation which is consistent with what people have claimed to have seen and written about at Loch Ness for centuries? You guessed it, a large animal exposing its large back to an audience which described it with a useful metaphor - an island which floats.

Three hundred and fifty years ago, Richard Franck had returned from Loch Ness with strange tales of an object he likened to a floating island. He though it was a mass of vegetation being blown around the loch. The Puritans of his day were very much rationalists who spent much of their time debunking the supposed miracles of their nemesis, the Roman Catholic Church. It is no surprise therefore that this scepticism overflowed into explaining away strange sights at Loch Ness.

Richard Franck is the earliest example of a thread of scepticism towards the Loch Ness Monster that continues to this day. The other thread is the continuing belief in a strange creature in Loch Ness. That line can be traced back to Saint Columba but existed before it.

Will the two threads continue to draw out another 350 years from now? That wouldn't surprise me at all.