Having spent probably too much time examining pictures which are suspected and definite fakes, I come back to the classic Lachlan Stuart photograph which, it must be said, has its fair share of critics as well. This next instalment is actually a response to the previous article which examined the claims of Richard Frere. In summary, four different versions of his claim that the photo was hoaxed can be found which understandably casts doubt upon the whole matter.

However, I received an email from an experienced Loch Ness researcher who made two points. Firstly, he referred me to a piece in Rip Hepple's June 1988 Nessletter in which Loch Ness researcher Alastair Boyd had written to Richard Frere asking him to expand on his hoax revelation. This can be found in Nessletter number 88 which I had actually scanned in preparation for inclusion in the Rip Hepple archive and is reproduced below. In this letter Frere refers to the Loch Ness Monster with the character "?".

Thank you for your letter concerning Stuart’s photograph of ? As you say many years have gone by since 1951 but I happen to remember clearly a meeting at Loch Ness side, in the vicinity of Whitefield cottage, with a man who represented himself as Lachlan Stuart. At that time I had a timber business and was in need of an additional horse for timber dragging. I had heard that, Stuart had such a beast, or could put me in touch with one, and our meeting was arranged by a third party. I met with Stuart in early August.

We discussed the horse but no bargain was struck, even after the woodsman had obligingly offered a dram from his bottle. Before we parted he took me down to the pebble beach where, concealed within a clump of alder or hazel, I was shown, on my promise of silence, three or four bales of hay (as supplied for horses) and some strips of tarpaulin. I was told that these were the ‘humps’ of ?. m S. was proud of his joke, in which he saw no harm, and he was greatly surprised that his photograph had come out at all, as it was taken ‘near dark’ I did not enquire at what margin of the day it had been snapped.  Stuart considered ? ‘a load of nonsense’ and poked fun at those who took it seriously.

From this you can see that I did not participate in the hoax, although, perhaps, my silence until recently may be construed as that of an accessory. At that time there was little genuine interest in ? and nobody to which sightings might be reported. Stuart referred to ‘his mate’ who may, or may not have been the elusive Taylor Hay. From the third paragraph of your letter I gather that you have read Steuart Campbell’s book. When I say that I find this is a totally convincing denouement of an example of unmatched human credulity you will see on which side of the fence I sit. Thank you for writing to me.

Nicholas Witchell also had this to say in a later edition of his book "The Loch Ness Story":

"Because, as certain newspapers would put it, I can now reveal that a couple of weeks later Lachlan Stuart took another Loch Ness resident, who is known to me and with whom I have confirmed the following details, on a stroll along the beach and showed him the bales of hay and sheets of tarpaulin which he'd used to manufacture his Monster. They were hidden in a clump of bushes. The man who was shown these props gave Lachlan Stuart a promise of silence and since, over subsequent years, he was never interested or impressed by all the hoo-ha about Nessie, he never thought to break his promise and reveal the reality of the photograph as it had been shown to him. That he has now done, and I'm grateful: it is important that the record be clarified and corrected as much as possible."

This may seem to clear things up but problems still exist and not least the issue of Tony Harmsworth being told a different story by Richard Frere (that he had secretly watched Stuart setting up the hoax). The emailer also suggested that Tony had misremembered the account and that his uncertainty is actually mentioned in his book ("Loch Ness, Nessie and Me"). This might seem to put the matter to bed but I do not think this changes the main problem of conflicting accounts and the ultimate reliability of  this evidence.

If we firstly examine the letter sent to Alastair Boyd, there are some clues in the letter which present a new problem. Frere states that he was running a timber cutting business at the time he met Stuart and he also said he was looking for a second horse to pull the timber. These two pieces of information can help us pinpoint when Frere claimed to have met Stuart. 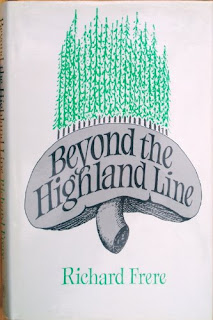 You may recall that I had used Frere's own autobiography ("Beyond the Highland Line" - cover above) to dig deeper into this controversy and I again refer to it here. On page 121 of the book, Frere mentions his first venture into this business after various other business exploits had been dropped and his friend:

"proposed a plan of his own. It was that he and I should look for a contract cutting timber."

This marked the beginning of Frere's long involvement in the timber business. But when did this timber cutting business begin? An examination of the chapter and a reference on the next page undoubtedly places the birth of the business in 1953.

"Today a skilled man using a powerful chainsaw can cut down a whole forest in next to no time but in 1953 these things were in their infancy."

That would imply he had his meeting with Stuart in August 1953. But later on in page 142 he actually refers to the problem of finding a second horse and states he had been looking for such a beast for "over a month". The previous page places this incident in February 1954. That would imply that August 1953 was too early and August 1954 would be a better date for meeting Stuart. Either way, this implies that Lachlan Stuart had apparently taken Frere down to the beach of the photo two or three years after the photograph was taken in July 1951! Were the hay bales and tarpaulin still hidden away at this "infamous" beach up to three years later?

What is more, if Frere had communicated with Nicholas Witchell ("with whom I have confirmed the following details") that he met Stuart two weeks after the event then he was contradicting his own autobiography! Once again, which version is to be believed - two weeks or two years after the picture was taken?

Perhaps some may accept this two to three year oddity, but I must say I find it a bit incredulous that the incriminating items were still "in situ" after such a long time and had not been moved away from prying eyes. The other strange part of this story is the very fact that he hid these hay bales. Consider the problem, you have three haybales big enough to simulate humps ranging up to five feet across. How do you get rid of the evidence?

Hiding behind thick foliage is an obvious solution but it presents a catch-22, how do you get these massive bales of hay thru the dense thicket? You may suggest the obvious that they "went round the back" or something like that but Frere says they went down to the beach to see the bales which implies they were not far back into the growth. Having been at the site myself back in late May (picture below), my memory of the area leaves me thinking the vegetation is rather thin for this task and leaves me asking why Lachlan Stuart did not do the obvious, simpler thing and roll the bales back to a discreet place at his croft? 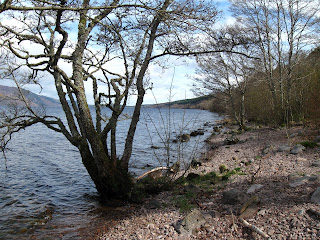 That question could be argued about all day but it is a big risk to me to hide the incriminating evidence so close to the "scene of the crime". Indeed, we know that within days of the photo being taken, Constance Whyte and two reporters from the Sunday Express were on the beach checking the veracity of the story and found nothing. I would take that to mean there were no hay bales hidden at the beach. In fact, I always found it strange that they never noticed the surely visible straw that must have fallen off these hay bales as they were rolled around and were washed back onto the shore.

There is indeed a degree of uncertainty in what Tony says in his book but I would suggest this was because the introduction of the other Frere story had muddied the waters rather than indicating a pre-existing doubt. However, Tony sticks to his guns in his book by saying "I am pretty confident my account is correct". In fact, I think this idea of misremembering can be dismissed because Tony Harmsworth was saying the same thing 25 years before. In his book "Loch Ness - The Monster" published in that year of 1985, Tony Harmsworth has this to say about the Lachlan Stuart photograph on page 5:

""Recently a highly respectable local person has claimed he was present when the picture was being set up as a deliberate hoax".

A defective memory may be at best plausible thirty years after he spoke to Frere, but after only five years? I think the burden of proof lies with those who hold this position and we can conclude this article by contending that the Frere saga continues to be a contradiction and hence unacceptable as evidence.

Part Three can be viewed here.