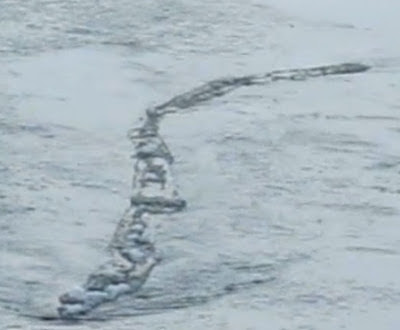 When I saw this recent video (or link here) of a strange object near the Lagarflot, Iceland, the word "skrimsl" came back to my mind after many years.

The Skrimsl is the reputed inhabitant of that lake and others in Iceland with a reputation going back to Norse times. The werewolf expert, Sabine Baring Gould, even got involved in them when he visited Iceland in 1860. He obtained a description of an odd 46 foot beast which one of the witnesses drew (below).

I enjoyed reading about it back in the 1970s as a kid when Peter Costello recounted the tale in his book "In Search of Lake Monsters". What this video shows is intriguing but I am sure multi-interpretations will be suggested across the Internet in the weeks ahead. It was taken by a Hjort Kjerúlf but some suggest already it is debris which has frozen solid on the river.

Google Translate is less than perfect in its rendition:

Skeptical believe, however, netadræsa was blown into the water and frozen solid. So when the river began to forge their hlykkjaðist "worm" on the river.

Any Icelanders reading this who can translate?

UPDATE - I think netadræsa refers to a fishing net. Also, the owner of the film is not claiming it is anything - but certainly no hoax on his part. It is also amazing how the world media has picked up on this but has also called it something like "The Loch Ness Monster in Iceland". It is always curious but understandable how anything mysterious in a lake is labelled "The Loch Ness Monster in ..." but then again those four words are a global and instantly recognisable brand name (under no one's trademark!).