My attention was drawn to a post recently which concerned a modern sighting of the monster of Loch Awe. The original post was by Lindsay Selby and can be found here.
One of the comments was posted by a person named "Sallyumbo" which goes as follows:
Around Easter 2000, my husband and I were driving north past Loch Awe for our first weekend away together. As we drove alongside the loch, I saw to my amazement something that looked to me exactly like pictures I'd seen of the Loch Ness Monster. A long neck and head sticking out of the water at the front, and two humps behind it. It was moving quite swiftly through the water.

I was completely astonished. I had never heard of any monster in Loch Awe. I actually said nothing, thinking that my new fiancee would think I was completely mad if I announced I could "see the Loch Ness Monster" so I just watched in silent wonder. A couple of hours later we stopped for lunch at a pub. There was tourist info available in the form of leaflets there, and one was about Loch Awe.

Imagine my feelings when I read, "Loch Awe is said to be home to a monster like that of Loch Ness". "It does!! I saw it!!" I yelled, beside myself with excitement. Needless to say my fiancee thought I was crazy. But I'm sure I really did see what people call the Monster of Loch Awe.
Now to add to what Lindsay said about a tradition of a creature in Loch Awe, the recent book "The Water Horses of Loch Ness" surveys the historical traditions of strange creatures in Scottish Lochs and though Loch Ness is first by the proverbial mile on the list, Loch Awe comes in a respectable second. So it seems that the folklore of old points back to something in the loch which echoed through to the beginning of this new millenium.
What "Sallyumbo" saw follows in that tradition of creatures. I did a cursory survey of the books I have and found no other modern era sightings of a beast in Loch Awe. Let us hope another sighting occurs soon to seal this monster's return.

Using the information provided by her, we can actually pinpoint the general area of the sighting in the map below. 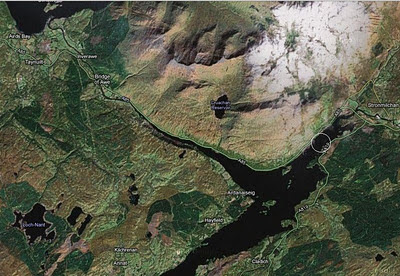 A view of the loch from that stretch of road can be seen here using Google StreetView (though the witness' exact location as the car moved is not precisely known): 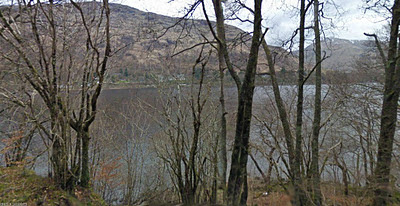 We can make a few further observations about the Loch Awe Monster.
The first is that any creature in Loch Awe has an easier access to the sea than the Loch Ness Monster would. Note the River Awe in the top left of the picture which connects to the sea loch Loch Etive and hence to the open sea. Loch Ness is harder to traverse due to the locks of the Caledonian Canal (though not impossible). So any arguments about not enough food supply are irrelevant if it can swim in and out of the loch (though I do not know the existing fish stocks in Loch Awe).
Secondly, she saw an extraordinary creature in an ordinary loch. So what you may ask? The point is this - critics of the Loch Ness Monster say people see monsters because they want to see monsters. This overstretched theory is always trotted out to allegedly explain how ordinary birds, wakes and deer can turn into extraordinary creatures with just the right psychological impairment applied to witnesses' minds. No doubt some will think "Sallyumbo" merely saw a bird swimming along in the water.
But how does that theory apply to this case? Quite simply, it does not.
Our witness states she had no knowledge of such a creature until after the event happened. No hyped up expectations, no strange things happening to the observational faculties. Likewise, we take the view of people looking at Loch Ness. To make my point via hyperbole, they are not hyperventilating with mad expectation as they approach the loch and do not jump up and down excitedly like three year olds whenever something appears on the loch. I suggest people are sensible and not given to dubious interpretations. They are not stupid ...
I do not doubt people mistake things for the Loch Ness Monster amongst the 10,000+ alleged sightings of the creatures but frankly not enough to explain everything strange that goes on in Loch Ness ... or Loch Awe for that matter.