In an earlier post I relayed what was then the latest sighting of Nessie by the Hargreaves of Foyers back in June. The link is here.


Subsequently, I have been to Loch Ness and visited their shop to have a chat with them about their experience. Firstly, they said the Inverness Courier article was an accurate enough account of what they had seen. I then asked them if there was a possibility it could have been a boat or some other familiar vessel seen on the loch to which they replied no.

Both witnesses came across as people who thought they had genuinely seen something and were not practical jokers or liars. They also rejected with a sigh the accusations levelled at them by anonymous comments on the Courier website that it was the tourist season and so it was time to put out some lies to boost trade. I quite agree with them, it is a nonsensical and libellous thing to say and unfortunately whenever a sighting is claimed from March onwards, this tired excuse is wheeled out by cynical observers. However, I did buy some stuff in their store and before anyone plays that cynic card, I was intending to buy some food for the drive home and theirs was the most convenient place to stop!

I then left the store and crossed the road to the Fall of Foyers milestone to have a look at the loch. The picture below is from Google StreetView but it underestimates what is visible from there to the unaided human eye. 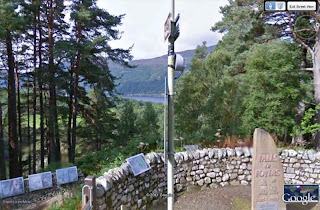 As stated before, there is plenty of surface area visible for Nessie to put in an appearance. From my vantage point, I could clearly watch one of the white Caley Cruiser boats travelling up the loch and I managed to photograph it as it disappeared into the trees. 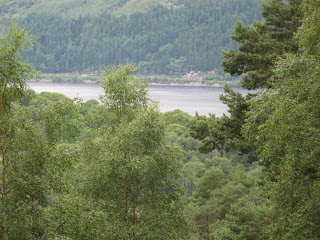 Assuming it was one of these boats then it would be 30 to 39 feet in length and 11 to 13 feet high. With those rough dimensions in mind, my own estimate of what I could easily see as a vertical neck like object would be at a minimum four feet. Below that may still be discernable but I do not have 20-20 vision even with glasses on, it depends on how good the observer's eyesight is.

My visit therefore reinforced my view that what the Hargreaves saw back in June was no optical illusion or misperception but a genuine sight of the Loch Ness Monster. Keep up the appearances, Nessie old girl!