The Forensics of the Loch Ness Monster

Continuing with the theme of the previous article on the Hugh Gray photograph, there has been various feedback ranging from "I see it!" and "I don't see it!" to more analytical responses.

Before I address the main point of this posting, some have said that by outlining the features I see in the eel-like head, I have admitted the image cannot be seen on its own. This is not true. What I annotated was a zoom in of the best image we have and hence de facto it becomes more grainy. So I show below a better zoom out and invite people to see the fish like head with mouth open on the right extremity of the creature.

Now one of the meatier points raised concerned the shadow on the creature. It was suggested that if Mr. Gray was where he said he was at the stated date and time then the shadow is in the wrong place. The sun would be roughly to his left and hence the shadow should be more to the right on the image. Naturally this raises the question of not so much Hugh Gray's position on the shore but rather his orientation with respect to the sun and the creature. Since the sun was somewhere to the south west then the creature had to make an appearance somewhere in that direction. Can this be achieved from the Foyers estuary? The answer is yes going by Google Maps. 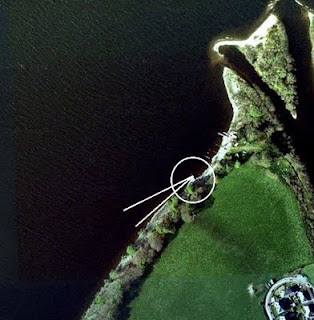 The geographical position is an estimate given I don't think anyone alive knows where exactly he was (but the accounts in Whyte's and Holiday's books helps a lot). The lines show the area where the monster likely put in its appearance. I will elaborate on this in another post but one point made was that the creature looks transparent as if the waves are going through it. I do not think this is totally correct. Where there is spray and water being thrown up then one can see through that but the creature is solid and the shadow extending from it proves this.

However, one should not assume that the shadow is a perfect representation of the creature's dimension but it can help us determine some factors (hence the title of the post). Firstly, shadows lenghten and shorten according to the sun's position. How high up was the sun on this occasion? We know the date, time, latitude and longitude so it is not difficult to come up with the altitude of the sun - it was about 11 degrees. This gives us the rough hand drawn diagram below.

Where x is the height of the creature above the water and y is the length of the shadow. The angle at the apex is our 11 degrees. The one assumption made is that the creature formed a roughly semi-circular shape out of the water when viewed laterally. The maths can be done on this (at end of post) and the ratio y:x is 4:1. That is, the shadow is about four times longer than the height of the beast out of the water.

But you then look at the picture and it is evident that the shadow is not four times longer than the apparent shape of the creature. This is due to the angle at which the observer viewed the object. Imagine the observer was directly over the creature. In this case, he would see the entire shadow length at four times the height of the beast. At the opposite extreme, if he was at the same eye level as the beast, he would see no shadow. So at this range from 90 to 0 degrees was an angle at which the observer viewed the beast and which would proportionately present a foreshortened shadow.

Now from what I can ascertain from the various books I have, Hugh Gray saw the creature from about 100 yards and was about 50 feet above it. This being the case gives us the following approximate diagram in metres.

This gives us an angle of incidence of about 10 degrees as a first estimate. We then divide this by 90 degrees and then multiple it by the ratio of 4:1 and the apparent shadow ratio is now only about 0.44:1 of the height of the beastie. Looking at the photograph of the suggested height of the beast and the extent of the shadow and we can see that this estimate is not far off. Though clearly these factors will change if the distance and height of the observer are altered. 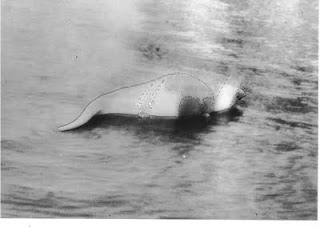 Note that I am not entirley satisfied with the outline of the creature I have proposed here. I will alter that in another post. If I haved erred in any calculation, please add a comment below.