Does anyone raise the hackles of the typical Nessie believer more than Frank Searle? Exposed as a hoaxer and general charlatan, he has earned a place in the annals of Nessie Lore for all the wrong reasons. 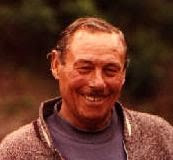 Since revisionism of Nessie icons is "Plat Du Jour" then why not Frank Searle? Perhaps his reputation is 100% unreformable, but let us see how far I get.

To begin on a personal note, I have had three involvements in the Frank Searle story. The first was when I met him personally in 1982. I was a student who cycled up to Loch Ness to the Altsigh Youth Hostel for a week of "Nessie Hunting". I made my way to his base at Foyers and came upon a rather tatty looking caravan and had a look for him inside. The walls were covered with various clippings, monster-like photos and notes by Frank. Nothing that excited the imagination so I went outside to see him making his way towards me smoking a cigarette. I introduced myself and we chatted about the monster scene. I can't remember now all what we said but there was a bit of the "them and me" about his situation with other "hunters".

Unbeknown to me, his time there was numbered and he was to be gone within a year or so. Around that time, I was in Glasgow coming out of a city centre library and got talking with a lady who knew Frank Searle and defended him against his adversaries. She gave me a booklet by him which turned out to be a book which had been pulled from publication. It was quite a diatribe against Loch Ness personalities known and still active today but I will come back to that later.

Finally and years later I was in contact with Andrew Tullis who was making a documentary about Frank Searle and asked me if I had any idea where he was. I did not, but I volunteered to look around Edinburgh in case he was still in Scotland. I drew a blank but Andrew did not as a speculative ad in a treasure hunting magzine led to his home in Lancashire but ironically he had only died a few weeks before. You can find out all in his documentary "The Man who Captured Nessie".

Fate had conspired to deny Frank Searle a final word on TV but we have his final book.

I was not minded to put my copy out on the Internet but someone else did and it can be found here courtesy of Mike Dash who writes on Frank here. It seems that Frank Searle, being dead, yet speaketh. A second link for Frank's booklet is also here.

So now is the time to review possibly the most controversial book on Nessie and her believers and skeptics called Loch Ness Investigation: What Really Happened.

The backdrop to the short book is warfare. War between Frank Searle and those stationed on the other side of the Loch at Drumnadrochit. Those under fire include Adrian Shine, Tim Dinsdale and others still around today. One is even insinuated as a sexual pervert, others as money grabbers and all as generally unsavoury. He counter-accuses those who accuse him of an attempted Molotov Cocktail attack on their boat. Clearly this is a book where one has to tread carefully else libel may be the dish of the day.

Now his accusation of profiteering on Nessie is hardly a revelation. Loch Ness is a major tourist attraction (even more so then) and this will inevitably attract entrepreneurs. That is nature of capitalism and free enterprise. Just because he quotes some metaphorically salivating at that prospect is really neither here nor there.

Nessie equals money, full stop. I don't take a purist view on this, I just ignore it. Unlike some, I have not given up my job to look for Nessie and so do not feel the pressure to supplement any pension or savings I may be relying upon with freelance Nessie work.

Frank tries and sets himself apart and aloof from this but this smacks of the hypocritical if he was already faking pictures for media money. The matter of Tim Dinsdale is interesting in this respect as he accuses him of asking for a fee equivalent to at least £2000 in today's money to act as a professional guide for a Japanese TV team over to make a documentary.

Dinsdale proferring his services for money? Why not I say? We need to dismiss this image of monster hunters as people detached from human nature and puritanically focussed on the big prize of the irrefutable picture or film to the exclusion of all else.

Frank Searle is of course the perfect example with his live in lovers and his story about decking Nicholas Witchell when he discovered him snooping around his base. Big deal, I say.

Human nature red in tooth and claw. Frank Searle helps dispel any notion we may have that Nessie hunting is akin to a bit of congenial bird spotting in a leafy booth. I won't accept his more extreme suggestions but in general there is a grain of truth in some of his observations. Nessie people, like Frank Searle, are imperfect. We just have to take a look at ourselves to begin to appreciate that.

So, if anyone says Frank Searle was a 100% liar, take it with a pinch of salt.

UPDATE: As it turns out, Monster Researcher, Paul Harrison, did locate Frank before his death and conducted interviews with him that he intends to publish this year. Watch this space.

You can also find an archive of Frank Searle's newsletters here.
Posted by Glasgow Boy at 15:02